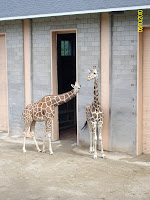 I just LOVE the Zoo! Especially when I get to take little Bubba who is an animal lover to the max! In fact, he carried a little lion with him the entire trip and never let go. In the car he had 3 lions that he played with on the long drive to and from the zoo.

Since Tia had to be at work by 2:00 we got up very early and got there just as the gates were opening. It had been raining through the night, but the weather was nice, overcast but not too cold. I'm not sure if it was due to the coolness of the weather or because it was so early, but the animals were all up and moving around. It was PERFECT!

About half way through our excursion Shandra looked down and realized that she had two different shoes on!!!! It was so funny!

Our favorite part was watching little Zuri, the new baby elephant. She was so cute. We could have watched her all day long.

There were workers walking around carrying animals. They would let you touch them (if it wasn't too dangerous) and answered questions.…
1 comment
Read more
More posts