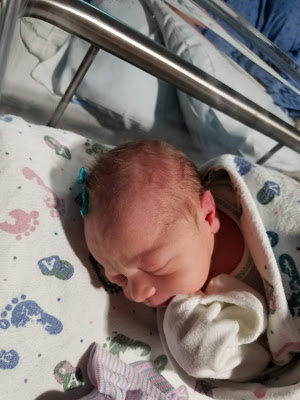 We have a new granddaughter!

The most-anticipated day arrived with Shandra and Hayden heading to the hospital very early in the morning for her scheduled c-section.  Kalel spent the night with Kim and me.  He has been so excited for his new sister to arrive!
We arrived at the hospital just minutes before Shandra, Hayden, and the baby arrived.  Kalel insisted that Kim and I close our eyes until he got a chance to see the baby because he wanted to be the 3rd one in the family to see her.
Kalel is absolutely thrilled to have a little sister.  He said that he was even excited to have the job of changing her diaper!   Poor little Kiaya soon became our little Glow Bug.  Her bilirubin was high very early on, so she was put under the lights at only 8 hours old!   She ended up staying under the lights for a full week before she was declared jaundice free and allowed to be held, snuggled, and cuddled with her anxious father, brother, and grandparents.
Needless to say, we are all very excited to…
1 comment
Read more
More posts