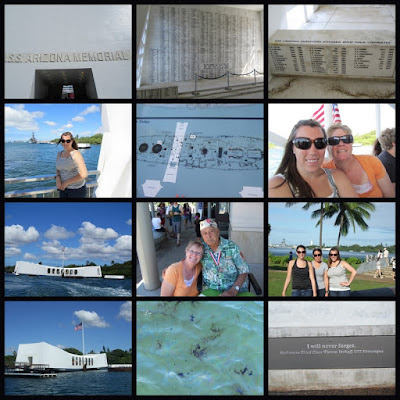 Day 6:
We started our sixth day with an early visit to Pearl Harbor. I had heard from other people how emotional you get when visiting Pearl Harbor, and I should have paid more attention. It was a very awe inspiring, perhaps even reverent place. We wandered around the grounds and visited the museum where we learned much about the bombing there. We then attended a movie that included actual video footage of the attack. We were instructed not to talk or laugh during the movie or on the boat ride out to the memorial of the USS Arizona. It was not difficult to keep that silence. The knowledge that several thousand men were killed and many of them buried on the ship there on one day was overwhelming and very emotional. When I saw the wall of the names, I could not hold back the tears.

Kim’s uncle was there at Pearl Harbor on that fateful day, and that knowledge made the whole thing more real to me. After visiting the memorial we returned to the grounds where were honored to have the opportu…
1 comment
Read more 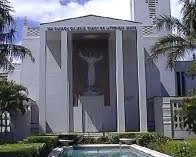 Day 5:
Rondi and I attended the McCully ward in Honolulu. The building is amazing. The chapel is shaped kind of like a big T, which seats facing from the sides on the front. There are about 10 sets of doors that can be opened to let air in.
They have Sunday School Classes taught in each of the following languages: English, Spanish, Chuukese, Marshallese, Pohnpeian, and Japanese! There is a beautiful reflecting pool in the courtyard. It is a beautiful building, and the people were very, very friendly. About ½ of the people there were visitors! But, it is so nice, that no matter where you go, church is conducted exactly the same, lessons are taught the same, and the sacrament is the same. The only difference in Hawaii is that each speaker begins by saying, “Aloha!” at which point the congregation responds with, “Aloha!” I like it.

Later we decided to take a hike up to Muanawili Falls. At the beginning of our hike we met a man and his daughter coming down. He said to us, “you are enter…
Post a Comment
Read more
More posts