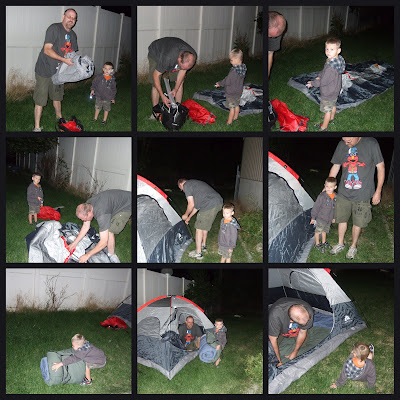 What could be more fun that camping in the backyard with Grandpa? 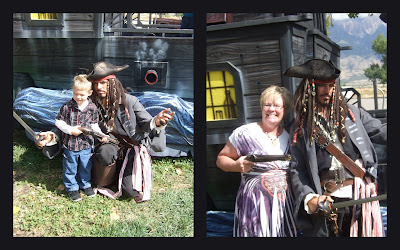 Tasha and I took Bubba to a pirate's festival out at Willard. There we were privileged to meet Cap'n Jack Sparrow! I absolutely LOVE Cap'n Jack! Ok, it wasn't the actual Cap'n Jack, but he was the best impersonator! He had his speech and all of his mannerisms down perfectly! He had a wonderful ship that the kids love to play on. Since Tasha and Bubba have spent many days playing pirates, this ship was like a dream come true! They spent a long time scanning the horizon for pirate enemies and firing the "cannons" on the other ships! They also searched for islands which were home to buried booty, especially gold dubloons. They spent the entire day saying, "Aaargh, Matey!" and "Yo-ho-ho".
It was a very fun day! The festival itself wasn't as great as we had hoped. It was the first year it was held, and it certainly needed had room to grow. However, we had a fantastic time, and I will never forget my day with Cap'n Jack!
Post a Comment
Read more 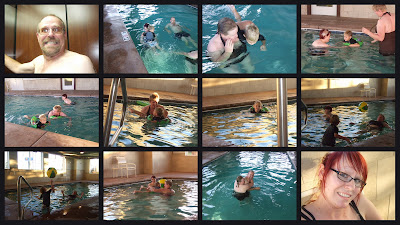 The first part of August we had the opportunity to move Tasha to Cedar City. This was a BIG step for Tasha. She has hesitated to move far away from home, but yet she has always wanted to have a "college" experience where she could live with roommates away from home and have the opportunity to attend college games, parties, and dances. Unexpectedly the opportunity presented itself. She found a job working at a massage school/salon in Cedar City where she gets to do 4-5 massages daily - a dream come true for her. She found a cute little house with 3 fun roommates. And, the best part is that she gets to see Zane daily while he attends Southern Utah University. Last year, she remained local while he was at school. With him, she gets to experience the college life.


Although I didn't like the long 5-hour drive (I really don't like driving!) we had a great trip. Shandra and Tasha got to spend the entire drive down bonding as sisters, while Kim and I followed behind. Bubba t…
Post a Comment
Read more
More posts