A little feast without the calories!!

Please visit Jodi's blog!  She posts these for us.   Feel free to play along for some yummy fun! She will post a new one each Thursday night.  JOIN IN!!! Food 4 Thought Friday ~ This week's questions: 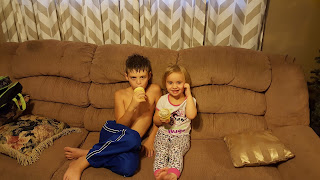 Kalel started school this week – 4th grade!  He is growing up too fast!  Because his mother had to work,  Kalel, Raelynn, and I had a night-before-school slumber party.  Of course after playing some games, we had to have ice cream cones before bed!

I just love those two little munchkins!
Kalel's teacher this year is Mrs. Broersma.  She was born in Germany.  Kalel says that he really likes her.  I'm still having trouble believing that he is old enough to be in 4th grade.  I remember a very long time ago when I was in 4th grade - I thought I was so grown up!  And now Kalel is there.

Shandra posted the following on her FaceBook page:
This little monster told me he got kissed last year at school by his girlfriend. I said that's not okay! He said " look at me! Who could blame them" ..... I'm in trouble!!!!!!

The next day she posted:

"Don't worry, my 9 year old baby boy just told me ..in the first week of school .. a girl he likes gave him her number today.…
Post a Comment
Read more
More posts