A little feast without the calories!!

Please visit Jodi's blog!  She posts these for us.   Feel free to play along for some yummy fun! She will post a new one each Thursday night.JOIN IN!!!

Food 4 Thought Friday ~ This week's questions: ♥♥♥♥♥♥♥♥♥♥♥♥♥♥♥♥♥♥♥♥♥♥♥ BACK IN TIME
Breakfast ~ What occupation did you want when you were a child? Believe it or not, I wanted to be a doctor.  Either that or an airline stewardess.  I guess that shows that I have always had a love of medicine as well as an urge to travel.

Lunch ~ Name a few favorite memories of your elementary school days.  (This is one of the very few positive winter stories I have) I used to love it when it would snow really hard and the plows would make mountains of snow on the playground blacktop.  I loved to climb to the top and play “King of the Hill” or lay on our backs and slide down the hill using our slick coats as a sled. I remember that we used to practice doing handstands every recess for years.  I w…
1 comment
Read more 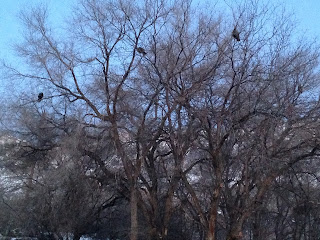 Tuesday when I walked outside I heard a rustling in the trees next to our house.  When I looked up I was surprised to see not one, but four turkeys roosting in the trees!

It was amazing!  These turkeys have been hanging around our neighborhood for quite some time, but I didn't realize that they roosted in the trees!  I didn't even know that they fly.  They are huge.

I went to a dermatologist to have him look at a few spots on my face that I worried about.  The one I was most worried about turned out to not be anything to worry about, but the doc said that I had two pre-cancerous spots.  I decided to have them frozen, one on my eyebrow and one smack-dab in the middle of my cheek.  As he was spraying the one on my eyebrow I felt as though I was being stuck by a bee, about 10-15 times!  However I was brave and tolerated it well.  The one on my cheek was a different story!  I'm not sure why, but IT HURT!!!!  I almost crawled off of the table!  It was BAD!