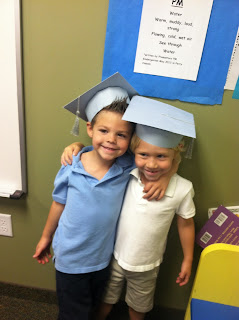 Kalel graduated from kindergarten!  He is getting so big! We love that school that he is attending.  It has been a great year and he has learned so much!  He was especially fortunate to have his cousin in his class. Kalel and Corbin   Mrs. Espinoza Kalel's fabulous teacher Mrs. Conger Kalel and Corbin's teach for next year
Post a Comment
Read more 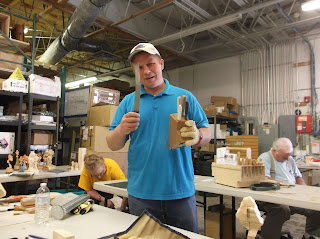 The annual Memorial weekend wood carving jamboree was again held in Boise and of course Kim, his brother, Dave, and I were exited to go.  But, to add to the fun, this year their other brother, Doug, flew up from California and joined us!  Doug is a novice carver, but no one was worried about him catching on quickly. The Olsen brothers were fortunate to have another Olsen, Ryan, as their instructor.  Ryan has quite a history with the Olsens beginning years ago when Ross and Joan attended with us when it was held in Twin Falls.  Ryan was quickly "adopted" by Ross and Joan when they found that he had come to the Jamboree alone.  That first year Ryan attended Cleve Taylor's class with Kim and Joan.  It was his first year carving and the knife he used to carve with was an old kitchen steak knife!  Cleve took pity on the new, yet talented, carver and donated a few tools to him. Every year since, Kim and Dave have made a really big deal about joining with Ryan as the Olsen b
Post a Comment
Read more
More posts