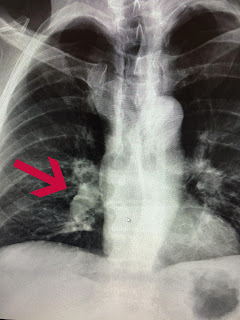 So, I was hoping for a week with good health for all, however I should have known better.  After taking a sick day on Sunday I have steadily and joyfully improved with just a slight lingering cough and a voice that cracks as if I were a boy in puberty.  Kim got hit hard Monday.  He was much worse that I was, cough, pain in his lungs, etc.  He ended up taking the rest of the week off work.  Wednesday night he was up all night with severe abdominal pain, and the next day he went to see Dr. Dave.  Diagnosis:  pneumonia and possible gallbladder disease.  A course of antibiotics and gallbladder tests at the hospital were next on the agenda.  It will be next week before we get the test results. The arrow pointing to the pneumonia Kim's brother, Dave, remains at the University Hospital undergoing rehab from his stroke.  Apparently after some additional testing they have found that he has some damage to the "executive suite" of the brain.  Basically it means that he has dif
3 comments
Read more
More posts